The Cefiro Alternative In Australia 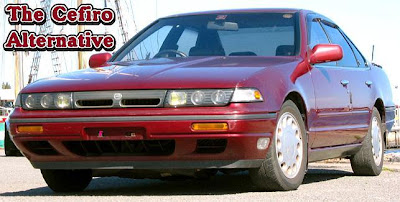 The RB20DET Nissan Cefiro is a quick, practical and cheap Japanese import alternative.

Silvias, 180SXs and Skylines are without question some of the most popular grey imports in Australia; it seems people just can't get enough of Nissan performance, reliability and drift-ability. One Nissan that's curiously left off buyers' Japanese imports list, though, is the top-line Cefiro... 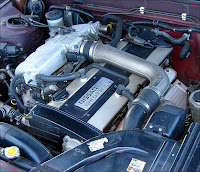 While the lesser JDM (Japanese Domestic Market) Cefiro models come powered by boring SOHC or DOHC 2-litre atmo engines, the top-line 'Sports Cruising' model offers the ability to run almost as quickly as a R32 GTS-t. That's no surprise when you discover the Cefiro Turbo packs the same silver rocker cover RB20DET as the GTS-t, though it is detuned slightly to 151kW at 6400 rpm and 265Nm at 3200 rpm (just 7kW less than the GTS-t). The RB20DET 2-litre's static compression ratio is 8.5:1, breathing is through a DOHC, 24-valve alloy head and there's a single turbocharger with an air-to-air intercooler hung off the side. A hotwire airflow meter, knock sensor and electronic boost control are also part of the engine deal.

As far as we can determine, the Cefiro Turbo came offered with either a 4-speed automatic transmission or a 5-speed manual. Our test car (supplied by Adelaide's Yahoo Motorsport) was an auto variant and, driving through its standard 4.63:1 rear LSD, could run to 100 km/h in the mid-to-high 7-second range and was a proven low 15-second quarter mile performer - not bad for a 2-litre sedan in stock form. On, the road the Cefiro offers great mid-range punch and exceptional smoothness.

Interestingly, the '88 released Cefiro (labelled as the NA31 series) is built on the R32 Skyline platform. Accordingly, the suspension layout is fundamentally the same with double wishbones at the front and a traditional Nissan multi-link rear. Drive is to the rear, of course, and HICAS II (rear wheel toe control) is fitted to some examples. Like most RWD turbo Nissans of the era, the Cefiro turns-in reasonably well and has on-demand power oversteer. Body roll is more noticeable than in the sporty Skylines, though the upshot is a more comfortable ride. 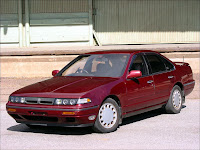 Weighing 1350 kilograms, the RB20DET Cefiro is equipped with ventilated disc brakes front and rear and ABS was an extra cost optional when new. Steering is via a power assisted rack and pinion arrangement, which is fairly light.

The Cefiro's sheet metal is totally unique - nothing is shared with a Skyline. Its conservative but flowing lines were intended to appeal to upper-level buyers in Japan, hence you'll also find a bit of chrome trim around the side windows and door handles. It's not a bad shape, but the projector headlight front-end is a little too fussy to match the rest of the car. Alloy 15-inch wheels were fitted to most examples and the factory tyre size is 205/60 15. 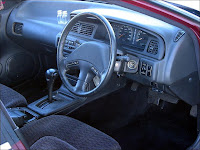 Inside, the Cefiro offers typical medium sedan accommodation and practicality. Trim is to a high spec including electric driver's seat adjustment, adjustable reach and tilt steering column, analogue climate control, power windows and (retractable) mirrors, cruise control, a 4-speaker radio/cassette (suitable only for Japanese radio frequencies), central locking and a leather wheel (with controls for the audio and cruise systems). A power sunroof was an option.

Instrumentation is all very easy to read and comprises a 7000 redline tacho, 180 km/h speedo, fuel level and coolant temp gauges plus a gear position indicator. Like many Nissans from the late '80s/early '90s the interior is quite drab but it is comfortable. 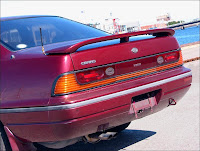 The very first Cefiros from 1988 are now available in Australia cheaply, thanks to the 15-year-old import laws. This particular vehicle - with an apparently genuine 99,000 kilometres on it - was being sold by Yahoo Motorsport (in Adelaide) for $5200 plus the relevant ADR-ing. ADR-ing for the Cefiro includes things like door intrusion bars and child restraint anchorages and - depending who you get to do the work - will cost up to around $1200. 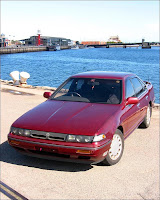 Replacement parts are something of an issue for the Cefiro since its body, chassis and driveline was never seen in Australia. Japanese importers have, however, built a reasonably strong supply of second-hand RB-series motors, transmissions and diffs and there are plenty of R32 Skylines being wrecked for parts - we can only imagine some of the R32 suspension components are interchangeable with the Cefiro. Whatever you do, though, just make sure you don't bend any of the panels or you'll find sourcing replacements pretty tough - maybe pick something else if you want to learn how to drift...

Potential is the keyword for the Cefiro - sure, its standard performance is quite good but it's oh-so easy to get it hauling in the 13s or 14s across the quarter... 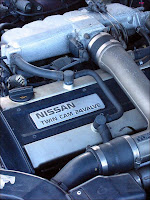 If you're chasing easy 14s - nothing too strenuous on the transmission - all you need to do is whack on a 3-inch exhaust from the turbo back (a second-hand system to suit R32 GTS-ts might come close to bolting straight on), remove restriction from the air intake and bump up boost pressure to about 15 psi. Oh, and you'll need to make sure the rear tyres are pretty decent otherwise it'll take an age to hook up.

For 13-second quarter miles, the formula is much the same except you also need to upgrade the intercooler (the stock unit is particularly small), increase boost pressure further (until you start to run out of fuel flow), fit a slightly up-sized steel wheeled turbocharger (the factory ceramic turbine wheel is known to disintegrate at high boost) and maybe add a transmission cooler. It's quite likely a set of rear semi-slicks will also be required in the search for traction.

Summary - if you're into all those things that RWD turbo Nissans are good at (straight-line performance, drift-ability and ability to withstand abuse) make sure you don't overlook the Cefiro. It offers all of these attributes plus more luxury and accommodation than its sportier 2-door cousins - yet it also comes with a smaller price tag.

Email ThisBlogThis!Share to TwitterShare to FacebookShare to Pinterest
Labels: A31 CEFIRO, Alternative, for drag race, for drift, in australia

Comments
Free Advertising - Get millions of visitors for your website for FREE!

Thanks for your visit,..

We will keep updating pictures ,... 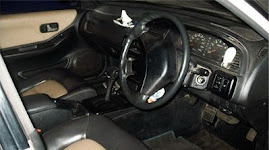